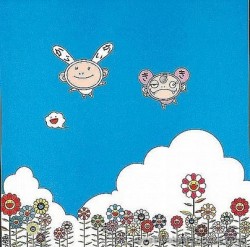 Takashi Murakami (村上 隆 Murakami Takashi?, born February 1, 1962) is a Japanese contemporary artist. He works in fine arts media (such as painting and sculpture) as well as commercial media (such as fashion, merchandise, and animation) and is known for blurring the line between high and low arts. He coined the term superflat, which describes both the aesthetic characteristics of the Japanese artistic tradition and the nature of post-war Japanese culture and society, and is also used for Murakami’s own artistic style and that of other Japanese artists he has influenced.[1]

Murakami is the founder and President of Kaikai Kiki Co., Ltd., through which he manages several younger artists and organizes the biannual art fair Geisai.[2]

Murakami was born and raised in Tokyo, Japan. From early on, he was a fan of animation and manga (Japanese comics), and hoped to one day work in the animation industry. He attended Tokyo University of the Arts to acquire the drafting skills necessary to become an animator, but eventually majored in Nihonga, the ‘traditional’ style of Japanese painting that incorporates traditional Japanese artistic conventions, techniques and subjects. Though he would go on to earn a Ph.D. in Nihonga, he gradually became disillusioned with its insular, highly political world and started to explore more contemporary artistic styles, media, and strategies.[3]

Murakami was dissatisfied with the state of contemporary art in Japan, believing it to be “a deep appropriation of Western trends.” [4] Thus, much of his early work was done in the spirit of social criticism and satire. Efforts from this period include performance art (Osaka Mixer Project, 1992), parodies of the “message” art popular in Japan in the early 90’s, (Dobozite Dobozite Oshamanbe, 1993), and conceptual works (e.g. Randoseru Project, 1991). He also began developing his own pop icon, “Mr. DOB,” which would later develop into a form of self-portraiture, the first of several endlessly morphing and recurring motifs seen throughout his work. Though he garnered attention, many of his early pieces were not initially well received in Japan.[5]

In 1994, Murakami received a fellowship from the Asian Cultural Council and participated in the PS1 International Studio Program in New York City for a year. During his stay, he was exposed to and highly inspired by Western contemporary artists such as Anselm Kiefer and especially the simulationism of artists such as Jeff Koons. He established a small studio, which, together with the Hiropon Factory in Japan, became the precursor to his company Kaikai Kiki. After returning to Japan, he would develop the core concepts behind his artistic practice and begin exhibiting regularly at major galleries and institutions across Europe and America. 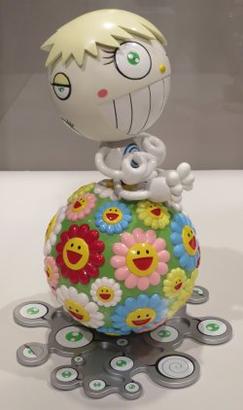 Murakami has expressed since early on a frustration with the lack of a reliable and sustainable art market in post-war Japan. Largely for this reason, he formulated a strategy wherein he would first establish himself in the Western art world and then import himself back to Japan, building a new type of art market in the process.[6] In order to create something rooted in his own Japanese culture and history but still fresh and valid internationally, he began searching for something that could be considered ‘uniquely Japanese.’ After concluding that elements of ‘high’ art were confounding at best, he began to focus on Japan’s ‘low’ culture, especially anime and manga, and the larger subculture of otaku. His artistic style and motifs (cute/disturbing anime-esque characters rendered in bright colors, flat and highly glossy surfaces, life-size sculptures of anime figurines) derived from this strategy.[6] This is demonstrated in his whimsical Cosmos Ball from 2000, in the collection of the Honolulu Museum of Art.

In 2000, Murakami published his “Superflat” theory in the catalogue for a group exhibition of the same name that he curated for the Museum of Contemporary Art, Los Angeles. The theory posits that there is a legacy of flat, 2-dimensional imagery from Japanese art history in manga and anime. This style differentiates itself from the western approach in its emphasis on surface and use of flat planes of color. Superflat also served as a commentary on post-war Japanese society in which, Murakami argues, differences in social class and popular taste have ‘flattened,’ producing a culture with little distinction between ‘high’ and ‘low’. The theory provided the context for his work and he elaborated on it with the exhibitions “Coloriage” (2002, Fondation Cartier pour l’art contemporain, Paris) and “Little Boy: The Arts of Japan’s Exploding Subculture” (2005, Japan Society, New York). These helped introduce Japan’s lesser-known creative culture overseas and such curatorial projects would become an integral part of Murakami’s multifaceted artistic practice.[1]

In accordance with the Superflat concept, Murakami’s practice involves repackaging elements usually considered “low” or subcultural and presenting them in the “high-art” market. He then further flattens the playing field by repackaging his “high-art” works as merchandise, such as plush toys and T-shirts, making them available at more affordable prices.[7]

In 1996, Murakami launched the Hiropon Factory, his production workshop, in order to work on a larger scale and in a more diverse array of media. His model inherits the atelier system which has long existed in Japanese painting, printmaking and sculpture and is common to anime and manga enterprises, such as Hayao Miyazaki’s Studio Ghibli. In 2001, Hiropon Factory was incorporated as Kaikai Kiki Co., Ltd.[5]

In 2002, at the invitation of designer Marc Jacobs, Murakami began his long-lasting collaboration with the fashion brand Louis Vuitton. He began by contributing artwork which was used in the design of a series of handbags. The series re-envisioned the company’s monogram and was a huge commercial success. Though he had previously collaborated with fashion designers such as Issey Miyake Men by Naoki Takizawa, his work with Louis Vuitton made him widely known for blurring the line between ‘high art’ and commercialism. It also elevated him to celebrity status in his home country of Japan.[7]

In both cases above, Murakami would later ‘re-appropriate’ these projects by incorporating their imagery into his paintings and sculptures, further blurring the boundaries between art and commercial branding and even questioning the existence of such a boundary.

Asked about straddling the line between art and commercial products, Murakami responded:

I don’t think of it as straddling. I think of it as changing the line. What I’ve been talking about for years is how in Japan, that line is less defined. Both by the culture and by the post-War economic situation. Japanese people accept that art and commerce will be blended; and in fact, they are surprised by the rigid and pretentious Western hierarchy of "high art." In the West, it certainly is dangerous to blend the two because people will throw all sorts of stones. But that's okay—I’m ready with my hard hat.[8]

Murakami has also collaborated with a wide range of creators and industries in Japan, a prominent example being the image characters he created for the press relations campaign of the major urban real estate development Roppongi Hills.[7]

In 2009, music producer Pharrell Williams unveiled a collaborative sculpture with Murakami at Art Basel, which Williams stated "illustrates the metaphor of value."[9]

In May 2014, with Pharrell and kz of livetune, Murakami created a music video for the remix of the Hatsune Miku song "Last Night, Good Night (Re:Dialed)". The team was assembled by the YouTube channel The Creators Project, headed by Vice and Intel.[10] The same year, Murakami's anime-inspired illustrations from his first film Jellyfish Eyes,[11]also adorned a t-shirt by Billionaire Boys Club, the brand co-founded by Pharrell and Nigo.[12]

From 2007 to 2009, Murakami’s first retrospective ©Murakami traveled from the Museum of Contemporary Art, Los Angeles, to the Brooklyn Museum of Art in New York, the Museum für Moderne Kunst in Frankfurt, and lastly the Guggenheim Museum Bilbao, Spain. The exhibition earned widespread attention for, among other things, including a fully functioning Louis Vuitton boutique as one of the exhibits.

In 2008, Murakami was named one of Time magazine's "100 Most Influential People", the only visual artist included.[citation needed]

In September, 2010 Murakami became the third contemporary artist, and first Japanese, to exhibit at the Palace of Versailles in France, filling 15 rooms and the park with his sculptures, paintings, a decorative carpet, and lamps.[13]

In February 2012, Murakami opened an exhibition in Doha, Qatar. Titled Murakami-Ego, this showed around 60 old works alongside new ones designed especially for the exhibition. Among the new ones, a 100-metre long wall painting depicting the suffering of the Japanese people after the Fukushima nuclear disaster.[14]

In April 2013, Murakami's first feature film was released in theaters across Japan. "Jellyfish Eyes" (originally titled "Me me me no kurage"[16]) is a live-action movie featuring CGI characters designed by Murakami called Friend.[17]

Murakami’s art encompasses a wide range of media and is generally described as superflat. It has been noted for its use of color, incorporation of motifs from Japanese traditional and popular culture, flat/glossy surfaces, and content that could be described at once as “cute,” “psychedelic,” or “satirical”. Among his best known recurring motifs are smiling flowers, iconic characters, mushrooms, skulls, Buddhist iconography, and the sexual complexes of otaku culture.

On 21 June 2011, Google featured a doodle tagged as "First Day of Summer" which was created by Murakami. This was accompanied by a Winter Solstice doodle for the Southern Hemisphere.[18]

Murakami has incorporated his operations as Kaikai Kiki Co., Ltd. in Japan (2001), Kaikai Kiki New York, LLC in New York (2001), and Kaikai Kiki LA, LLC in Los Angeles (2010). Kaikai Kiki executes Murakami’s wide range of artistic endeavors and consists of both offices and production studios. In addition to handling the production and promotion of Murakami’s artwork and projects, the company manages the careers of young artists, organizes international art projects, produces and promotes merchandise, and handles the organization and operation of the Geisai art fair.

Having earned success and recognition internationally, Murakami has devoted himself to nurturing and supporting the careers of a younger generation of Japanese artists. Likening the operation to that of a record label, he offers both logistic support and practical career advice. Through this endeavor, he also seeks to build an original and sustainable art market in Japan.[2]

In 2008, Kaikai Kiki converted the basement space beneath its Tokyo office into an art gallery. Kaikai Kiki Gallery has held exhibitions not only for the artists under its management but also international names such as Mark Grotjahn and Friedrich Kunath. All exhibitions are curated by Murakami.[19]

A second Gallery called Hidari Zingaro was opened in 2010 and has now expanded to include four separate locations within the Nakano Broadway shopping mall in Nakano, Tokyo. 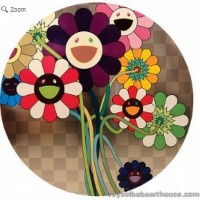 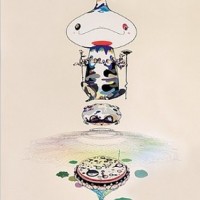 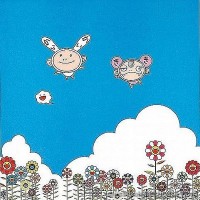 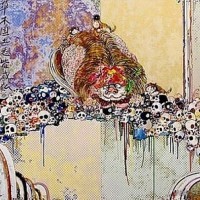 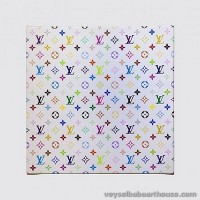 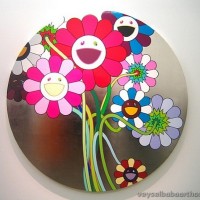 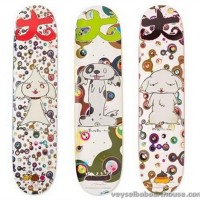 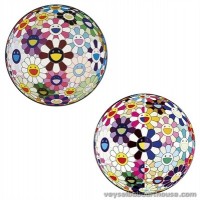